This statement is made pursuant to Section 54 of the Modern Slavery Act 2015 and California Transparency in Supply Chains Act of 2010 (SB 657). It sets out the steps which the Kering Group and the companies in that group have taken during the financial year 2019 to identify and prevent Modern Slavery, including forced labour, human trafficking and the worst forms of child labour from taking place in our supply chains or in any part of our business.

In this statement, the term “Kering group” refers to Kering S.A., a French corporation (“société anonyme”) registered with the Paris Trade.

Our ambition is to be the world’s most influential Luxury group in terms of creativity, sustainability and long-term economic performance.

As such, we are committed to improving the labour standards of those who work in our supply chains and businesses. This includes taking steps to both identify and address the risks of Modern Slavery.

Kering takes a cross-functional approach to governance over human rights challenges including Modern Slavery, integrated into its overall sustainable development governance. Specifically, human rights governance spans various departments, among which the Human Resources Department and its Diversity, Inclusion and Talent Unit, the Supply Chain Audit Department, the Compliance Department and the Security Department. It also falls within the scope of the Sustainability Department.

This Statement was validated by the Board on June 16th, the Board representing the Group and the entities it controls.

1 – PRESENTATION OF OUR GROUP 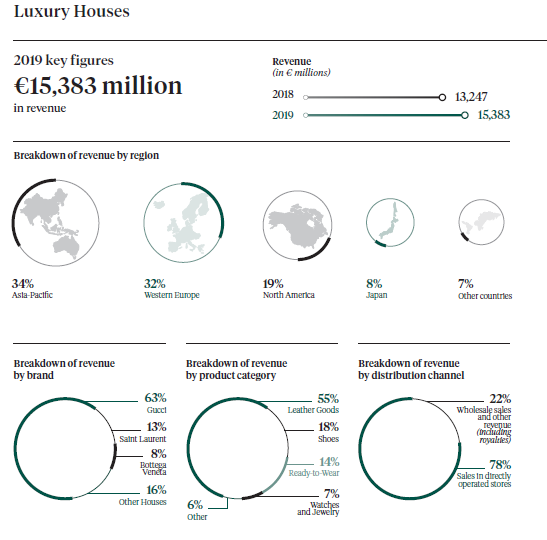 Kering Group works with 38,068 employees with subsidiaries in over 40 countries. As a global Luxury Group, Kering manages the development of a series of renowned Houses in fashion, leather goods, jewellery and watches as well as Kering eyewear. Our Houses develop innovative, creative, exceptional products, animate networks of directly operated stores and provide unique client experience. In 2019, Kering’s Houses operate 1,381 stores. Distribution channels include retail and wholesale both being both physical and digital. Kering’s Houses are present online via e-commerce sites, operated completely internally in the case of Gucci.

Though the Group mainly relies on a network of several thousand suppliers, it operates a growing number of ateliers. In 2013, Kering also began strengthening its upstream positioning in the luxury goods value chain, via the targeted acquisition of leather tanneries to secure raw materials sourcing.

Our Houses focus on their core expertise as they benefit from the Group’s integrated model and corporate functions: the Group pools resources and streamlines certain key functions for the Houses such as logistics – both integrated and outsourced, non-production purchasing, legal affairs, property, accounting, media relations, IT and the development of new tools.

Kering operates as well in the perfumes & cosmetics segment through licensing agreements between its main brands and leading industry players to develop and sell perfumes and cosmetics.

Kering has also been running the Kering Foundation to combat violence against women.

b - Our supply chain

Kering operates in the luxury market, whose supply chains are structured in a very specific way, as evidenced by the location of the suppliers in the centrally managed database in 2019. The supplier base managed by Kering’s central team for its Houses has the following characteristics:

Among its suppliers, Kering also singles out raw material suppliers. Those identified as key to the Group represent roughly 20% of all such suppliers, corresponding to approximately 80% of purchases.

In 2017 Kering analysed its practices by comparing them to the United Nations Guiding Principles on Business and Human Rights. This assessment enabled Kering to identify specific points for progress in areas including public commitment and policy, scope of internal control procedures, grievance and remediation mechanisms, and external communications. Following on from this analysis, Kering took steps to comply with the requirements of French 'Devoir de Vigilance’ legislation, to identify risks and prevent severe impacts, including on human rights and fundamental freedoms.

Kering also carried out a detailed analysis of the risks that the Group may face, including non-financial risks. As a result of this analysis, non-compliance with international standards or the Group’s standards in the area of respect for human rights and fundamental freedoms has been identified.

In 2020, Kering will be carrying out a Group–wide human rights assessment study.

3 – OUR STANDARDS, RISK MANAGEMENT AND RELEVANT ACTIONS ON MODERN SLAVERY AND HUMAN RIGHTS

We manage risks and impacts related to Modern Slavery as part of our existing programme on labour rights, ethical trade and human rights, which falls more broadly within our approach to sustainability.

Our Sustainability Principles established for all the Luxury Houses in 2015 span the three fields of human rights, labour rights, and health and safety among which elimination of child labour, forced labour, and human trafficking in all its forms. They are applicable across all Houses.

We published in 2018 our Kering Standards for sourcing and manufacturing processes. The key factors covered by the Kering Standards include working conditions, human rights and fundamental freedoms in production and extraction processes for our main raw materials. They include our efforts to ensure that people working in our supply chains are free from Modern Slavery.

b – Our risk management

No control system, regardless of how mature and tested it is, can guarantee the absence of risk, whether this relates to Modern Slavery or other labour or human rights issues. Our risk management is based on a continuous improvement process, taking into account feedbacks and good practices.

Kering Group and its Houses seek to work with suppliers to develop the most efficient collaborative and control systems in order to keep risk to a minimum and implement any corrective action in cases where non-compliance is identified. To meet these challenges, in 2016 Kering has established a dedicated central body within the Group to control the compliance of Group suppliers. The process, known as the Hercules system, is based on six key pillars:

For each of the 13 categories of the comprehensive audit requirements, a detailed description of what constitutes zero-tolerance breaches, serious breaches of compliance, moderate breaches of compliance and observations has been prepared. Depending on the results of audits, suppliers are classified as: compliant; partially; progress expected; zero tolerance.

All Group employees take a compulsory annual Ethics and Compliance course based on the principles set out in the Kering’s Code of Ethics.

In 2019, Kering’s teams continued their work on the circulation of the Kering Standards. Each House held one or more sessions internally. The Kering Standards have been shared with all of the Group’s key suppliers. A number of explanatory and training sessions were also held in 2019, as in 2018, particularly for suppliers of the Leather Goods, Fashion and Watches activities.

To round out these training courses, Kering’s Sustainability Department put in place an internal e- learning program presenting all of the Kering Standards. The course has been completed by more than 4,400 Group employees to date. Kering also worked to adapt it to external audiences in 2019, with a view to circulating it more widely among suppliers. A pilot course was organized with around ten leather suppliers in July 2019, with a view to much broader circulation later. These training support contain elements related to Human Rights and Fundamental Freedoms.

Introduced in 2005, Kering’s whistleblowing system was strengthened in 2018 to ensure full compliance with France’s Sapin II law. It is accessible to all people working for the Group and external and temporary personnel working for external partners or service providers under contract with the Group and/or its Houses. All employees and direct suppliers may use the system to submit reports. It may be used to report any suspicion related to Modern Slavery – among other offenses or violations. Kering is committed to protecting whistleblowers who raised an issue in good faith, and explicitly prohibits any form of reprisal in its ethics policies and procedures.

As a major player in the luxury goods industry and aware of its social responsibility in respect of a wide range of suppliers, subcontractors and raw material production chains, Kering engages in continuous and collaborative dialogue on human rights and Modern Slavery with key stakeholders in its supply chains and beyond. Kering is a member of the following initiatives, groups and programmes:

Within the portfolio of suppliers presented in Section 3.b, 3,441 audits were conducted in 2019 (an increase of 20% compared with 2018), breaking down as 1,840 comprehensive audits and 1,601 follow -up audits. A total of 39.3% of these audits were carried out by Kering’s Supply Chain Audit team, and 60.7% by external auditors, with the Group audit protocol applied in the same way for all audits conducted. This means that 56% of suppliers were audited in 2019. Over the 2015 - 2019 period, 83% of suppliers were audited. Moreover, Kering has undertaken to audit all of its key suppliers every two years. It should be noted that “activation” audits for new suppliers are comprehensive audits, and that they therefore cover the entire scope of a comprehensive audit.

Following these audits, 58.9% of suppliers were rated compliant, 30.1% partially compliant, 10.3% progress expected and 0.7% zero tolerance. A total of 68 suppliers saw their business relationship terminated in 2019 due to unsatisfactory audit results. Robust corrective action plans were put together following the audits, wherever breaches of compliance, and particularly serious breaches, were identified. Follow-up audits were then conducted to verify the resolution of the problem. The zero-tolerance breaches identified during the audits were dealt with immediately, in accordance with established rules and in coordination with the relevant Houses. To speed up the resolution of issues, the central team held more than 220 committee meetings with the Houses in 2019, which effectively resulted in the resolution of a large number of anomalies. 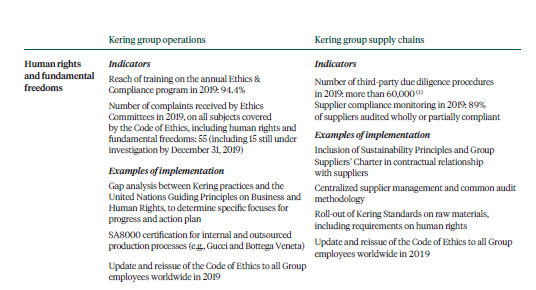 1 - Geographical breakdown in 2019 of direct suppliers and contractors, managed within the centralized system introduced by Kering in 2016.

2 - Third - party due diligence procedures undertaken under the procedure specified by the Group’s anti - corruption policy and including suppliers, subcontractors and other current or potential business partners (retailers, service providers, customers, etc.), along with related parties